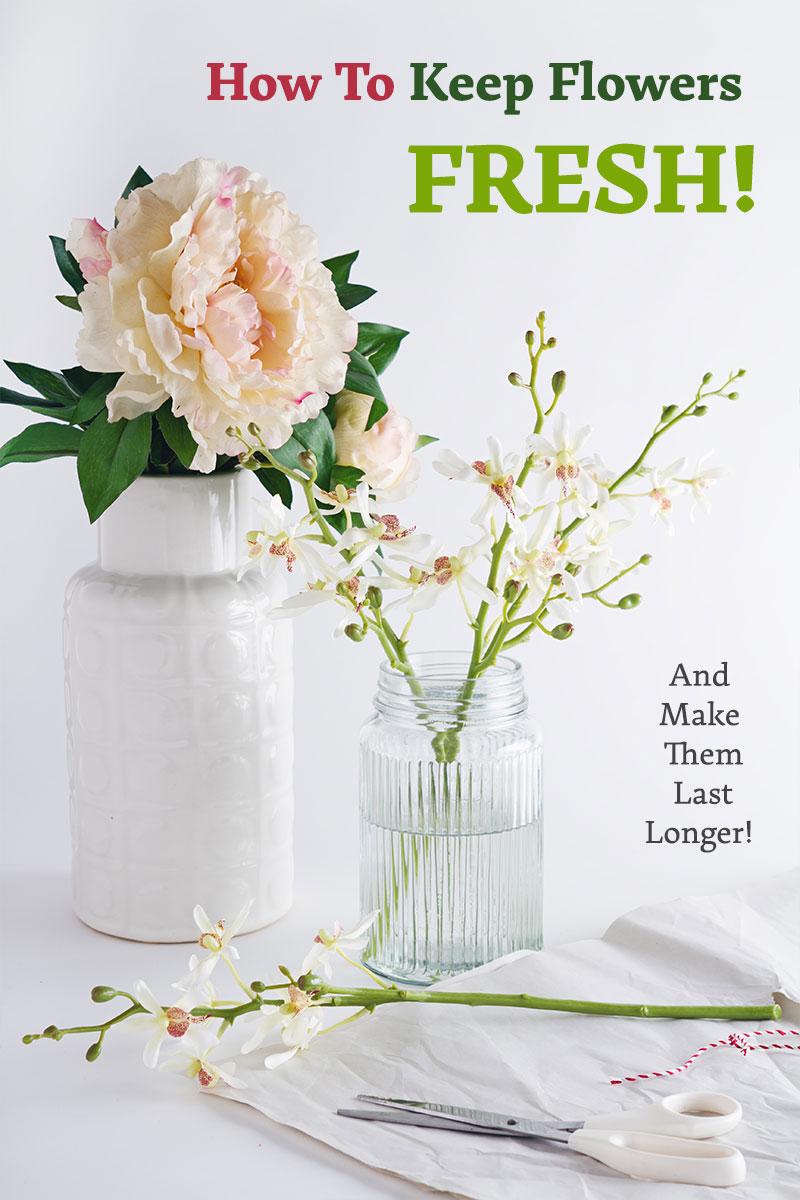 No matter how big or small the arrangement, anyone who gets them is always grateful for a chance to have a little bit of nature for their office or home. Some luxurious arrangements can be expensive, especially if they contain roses or tropical flowers that rarely make blooms.

A cut flower has a limited amount of time to retain its beauty before it begins to fade. So it is important to make the flowers last as long as possible. There are many ways to do this. Some of the most widely known methods are old wives tales that have little merit. Others have proven to be more effective, since they come from scientific research.

Read on for a few of the easiest options that you might want to try on your own the next time that you get a vase of fresh flowers picked from the garden or a specialty flower shop.

Kids like fizzy soda and some adults too…. but how about your flowers?

Flowers can usually get the nutrition that they need from the soil and sun. But cut flowers can’t do this anymore since they no longer have roots. To supplement a food source for fresh-cut flowers, sugar can be used.

Lemon-lime soda contains a hefty amount of sugar dissolved in a slightly acidic solution. In fact, there are about 16 tablespoons of sugar in just one can of it. Cut flowers placed in a vase full of lemon-lime soda, usually get too much sugar. However, the high amount of citric acid that the drink contains is an effective deterrent against bacteria that can quickly get out of hand. This solution is the least favorable of all of the ways of keeping flowers since they tend to wilt the fastest in it.

Vodka is a high-proof spirit that is so strong that it can kill most germs on contact. Some people use it as a natural disinfectant when there are no other medical supplies available to clean wounds. It is also a useful household cleaning aid if you don’t mind its pungent odor.

Because of this, a tradition started of substituting it for water for flowers. But while it eliminates the growth of bacteria in a vase, it is rather harsh on the flowers that kept in it. It causes their stems to appear gray, and the flowers droop. Surprisingly it makes the flowers last about one day longer than soda though. To lessen its harshness, it helps to water-down the vodka. That way, there will be enough of it to fight the bacteria, but it won’t harm the fragile cells of the stems.

But is that a waste of good vodka? I think we can do better than that!

There is a reason that florists store their flowers and greenery in a refrigerator. It helps to keep cut flowers looking their best for longer. But you don’t have to hide your beautiful arrangement in the fridge all of the time though. All you have to do is put it in the cool environment while you are sleeping. This gives the flowers a break from the warm, dry air that makes them wilt faster.

Unless you have a walk-in refrigerator, it can be difficult to find space for a flower arrangement that is rather large though, so this option isn’t always convenient for everyone. A word of caution should be mentioned though. Not all flowers enjoy chilly weather. Some like the birds of paradise flower detest the cold. So if your refrigerator is kept at its coldest setting, you might want to change it to a warmer one. And never put flowers in a freezer. Just a few minutes in there can damage them badly.

Dead Flowers Are A Headache

This headache remedy contains salicylic acid, which acts as a deterrent against the growth of bacteria. It is most commonly known for its use in preventing cut Christmas trees from losing their needles as quickly. If you want to try it: dissolve one or two aspirins in lukewarm water, and put the flowers into this mixture. But this isn’t always a good idea because each brand of aspirin has a different amount of salicylic acid in it based on the pill’s formula and the processing methods used to make it. The amount of salicylic acid is very minute, so one pill might not be enough to treat the degree of bacteria in the vase.

To make fresh cut flowers last longer, a combination of some of these methods is needed, but in a different form. And it is found in powdered flower preservative.

Most people are familiar with the tiny packets of it that come hidden in the cellophane that comes wrapped around their flower arrangement, but few know what it exactly is.

It contains a small amount of citric acid in it just like the lemon-lime soda has. It is essential for keeping the flower stems from closing up. If their ends seal, they can’t absorb enough water. There is also some sugar in it to feed the flower. The last ingredient is a biocide. It kills off any harmful bacteria that will make the stems rot. It also slows down the natural degradation process of the flower so that it will last longer.

Usually, only one packet of the preservative included with the flowers. Many people think that this amount is all that they need, this isn’t true though.

It’s better to change the water and preservative every two or three days. The biocide works very well, but the sugar feeds any bacteria that start to grow. So it can still quickly get out of hand. The vase should also be washed in soapy water and rinsed thoroughly.

What To Do When Your Flowers Arrive

Now that you know that using flower preservatives is the best way to keep your flowers looking their best for longer, you might be wondering how to use them properly. There is a more extensive process to it than most people realize.

Hopefully, you have enjoyed learning about flower preservation methods. By using this helpful information you can keep your fresh-cut flowers looking their best for about three weeks. Be sure to repeat the process of cleaning the vase, adding new water, and cutting the stems every two to three days. And don’t forget your flower preservative. You can purchase it at most flower shops in individual packets.

Sometimes, it is sold in a container with a measuring scoop too. If you get fresh flowers regularly, you might want to consider keeping some of it on hand just for this purpose.